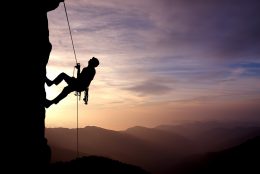 Faith is as instinctive as breathing; skepticism at long last is an affront. People not only want to believe; they do believe something or someone. If they do not believe in God, they try to believe in success or in themselves. When faith in Christ is thwarted or shelved, faith does not cease; as well might a man resolve not to breathe. No, he then sets his faith on gadgets or Hitler or scientism. Modern man, while repudiating the “sentimentalism” of religious belief, may have sold out to a vast fiction; perhaps he worships his own arguments as the final test of truth.

People are born to believe. They cannot live on questionings. For a man to say in honesty, “I do not believe that dogma” may be a virtue, provided he can add with radiant mind, “Yet I do believe this . . .” But without some positive avowal his negations become only darkness, for belief is as native as breathing. People cannot live on “facts.” Facts are not faith. Of late we have had a windfall of facts, in such multitude that man’s mind can hardly count them, let alone comprehend their meaning.

This inability is a portent that university education refuses to confront. It raises the whole problem of essential curriculum, and makes clear that a windfall of facts can be a famine of faith. Facts are like bricks. Modern man now spends his time analyzing the bricks to make sure they are sound. Thus the house is never built, and the spirit of man is left naked to the storm. Facts cannot supply their own meaning; only faith can give them meaning. A poor faith will give them a low meaning, atomic power will become H-bombs.